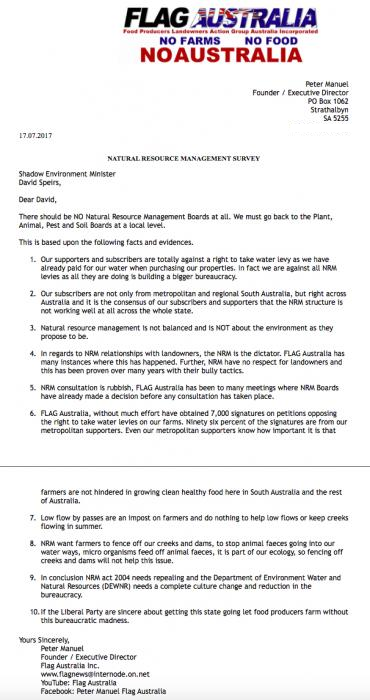 There should be NO Natural Resource Management Boards at all. We must go back to the Plant, Animal, Pest and Soil Boards at a local level.

This is based upon the following facts and evidences.

Our subscribers are not only from metropolitan and regional South Australia, but right across Australia and it is the consensus of our subscribers and supporters that the NRM structure is not working well at all across the whole state.

Natural resource management is not balanced and is NOT about the environment as they propose to be.

In regards to NRM relationships with landowners, the NRM is the dictator. FLAG Australia has many instances where this has happened. Further, NRM have no respect for landowners and this has been proven over many years with their bully tactics.

NRM consultation is rubbish, FLAG Australia has been to many meetings where NRM Boards have already made a decision before any consultation has taken place.

Low flow by passes are an impost on farmers and do nothing to help low flows or keep creeks flowing in summer.

In conclusion NRM act 2004 needs repealing and the Department of Environment Water and Natural Resources (DEWNR) needs a complete culture change and reduction in the bureaucracy.

If the Liberal Party are sincere about getting this state going let food producers farm without this bureaucratic madness.

3. The Governments contracted building certified survey report of November 2014 stated that from his

observations on site at the hostel that the facility could be reopened as a class 9a building, ( nursing home

- primarily for high care needs as well as residences with lower care needs).

4. The Governments estimate over $1,000,000 to reopen Kalimna is based on converting all 3 building to class

building certifiers survey report, allegedly paid for by the Government.

6. There was approximately $135,000 put aside for the sprinkler system that was never installed.

8. We the people will not back down on this very important issue. 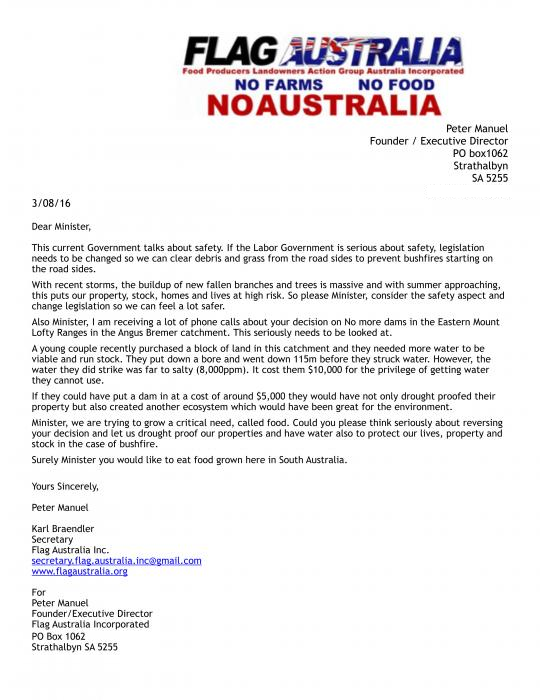 With recent storms, the buildup of new fallen branches and trees is massive and with summer approaching, this puts our property, stock, homes and lives at high risk. So please Minister, consider the safety aspect and change legislation so we can feel a lot safer.

Also Minister, I am receiving a lot of phone calls about your decision on No more dams in the Eastern Mount Lofty Ranges in the Angus Bremer catchment. This seriously needs to be looked at.

A young couple recently purchased a block of land in this catchment and they needed more water to be viable and run stock. They put down a bore and went down 115m before they struck water. However, the water they did strike was far to salty (8,000ppm). It cost them $10,000 for the privilege of getting water they cannot use.

If they could have put a dam in at a cost of around $5,000 they would have not only drought proofed their property but also created another ecosystem which would have been great for the environment.

Minister, we are trying to grow a critical need, called food. Could you please think seriously about reversing your decision and let us drought proof our properties and have water also to protect our lives, property and stock in the case of bushfire.

Surely Minister you would like to eat food grown here in South Australia.

WE ARE STILL WAITING FOR AN OFFICIAL REPLY FROM

THE MINISTER TO OUR LETTER DATED 8TH APRIL 2015

Would you please clarify for me, the taking of water from a Creek, Dam or

River for stock, domestic and bushfire use is exempt from any levies or

This is a yes or no answer Minister, please keep it simple. 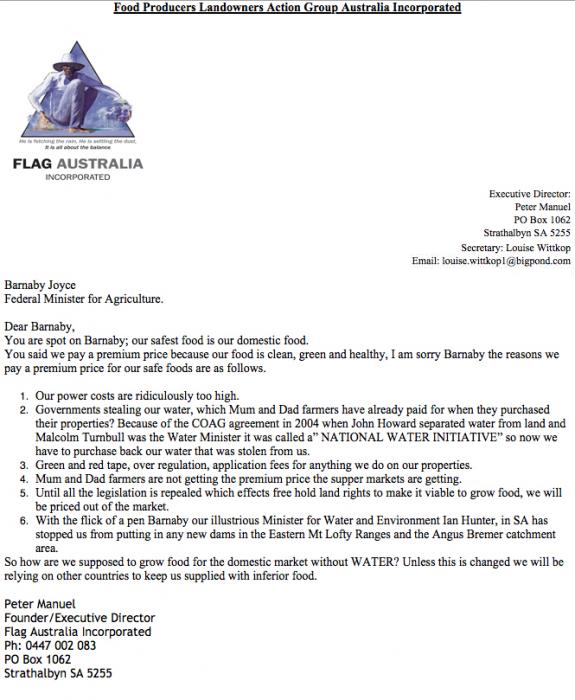 A BIG THANK YOU

Many thanks for crossing the floor in Oct 2014 to vote with the Labor Government to enforce farmers to pay for their own water.   I never thought I would see the day when Section 100 of The Australian Constitution would be violated and flaunted by a state government, especially by a liberal government.

You finally have shown your true colours.  We now have a truly embedded Labor/liberal coalition government in this state.  I have supported a liberal party financially for forty seven years.  Never again.

I trust you will sit quietly in the chamber till the next election to maximise your severance pay and then slip quietly away without bothering to groom and profile a younger replacement.

At the age of 70 years, I will be directing my political energies to replacing you and your cohorts with independents who are focussed on the wellbeing of farmers and getting rid of bureaucracies such as the NRM EW&NR.

I am terribly disappointed in you.

I have enclosed copies of my extortion invoices for you to put under your pillow. 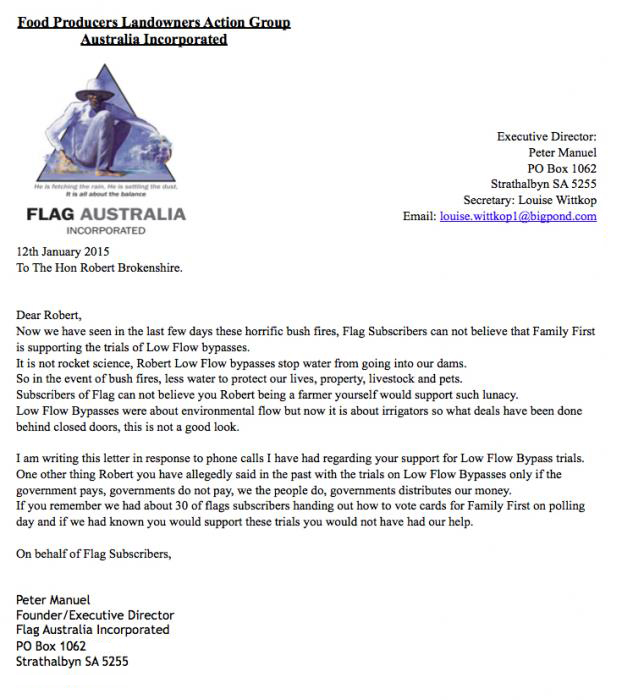 Thank you for having your PA call me in regard to the email I sent you on the 30th December 2014 asking you as acting Water Minister to revoke the no more dams in the Angus Bremer catchment area legislation that Ian Hunter introduced. Also thank you for forwarding it on to Ian Hunter now that you are no longer acting Water Minister, here's hoping he attends to it quickly and listens to we the people who are trying to drought proof our properties and protect them from bushfires.

LETTERS TO OUR POLITICIANS 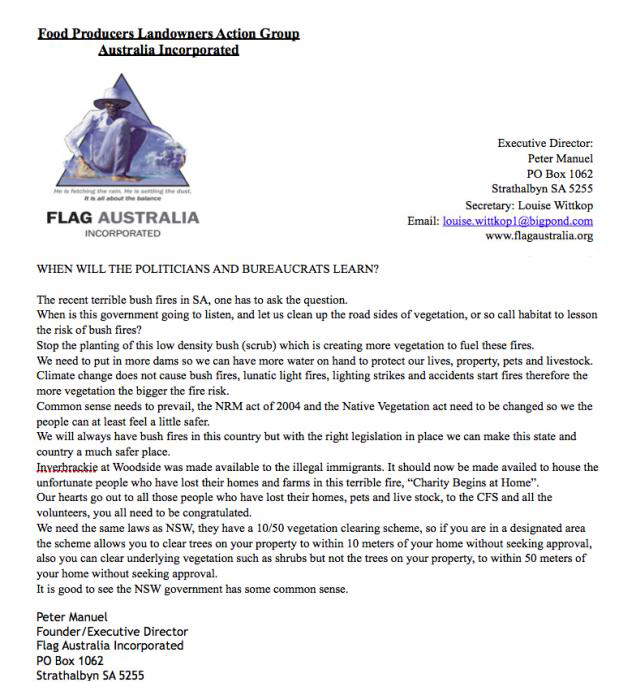 Now you are Acting Minister for water and you believe farmers are the backbone of this country.

Ian Hunter early this year with the flick of a pen banned new dams in the Angus Bremer catchment area, now we can not prepare for drought and he has also devalued our properties.

So with a flick of a pen you can reverse this and we can drought proof our farms and get on with farming.

You are spot on in-regards to Peter Spencers situation.

Yes Peter's Property Rights Compensation case is certainly as big as Mabo. Good on you Bob for supporting Peter Spencer who has been through HELL, because of RIDICULOUS  Native Vegetation and Land Clearing Laws.

In SA the Natural Resource Management Act 2004. As well as the Water Allocation Plan and Native Veg Act are not only taking away our Property Rights, but destroying our ability to grow FOOD on our FREE HOLD Properties.

The Powers to be say we are going to have a World shortage in FOOD. They are absolutely right, not because of an increase in World population

But the DRACONIAN LAWS that are been forced apon us FOOD PRODUCERS which is making it so difficult for MUM and DAD farmers to grow healthy FOOD.

Unless we get big change in this country we are very close of relying on other countries to supply us with FOOD.

That puts us in a very vulnerable and DANGEROUS situation.

How disappointing to hear your heartless words Senator.

In your own words I quote,

"Farmers who cannot survive drought without help from their fellow Australians should not be propped up or encouraged to sit on their hands until it rains. The only incentive they need is the one that motivates any business which is to remain profitable and sustainable. If they cannot do that they should sell their property to someone who can".

You are completely out of touch and out of order Senator. How can any farmer prepare for a drought that could last 5 years or more. A two year drought is bad enough. To suggest a farmer should just sit on his hands and wait for rain is not only heartless, it's plainly insulting.

How would you like to have to go and shoot your livelihood because of no water or feed and all because of no fault of your own? Maybe you should have your salary taken from you for a few years and see how you survive on what 'Patty shot at'?

Next time you sit down for lunch or dinner, just think long and hard as to who produced it. A Farmer!

And to suggest selling the farm to someone else! Guess what, they won't be able to survive either!

So the best thing for the people of your electorate is to remember your heartless comments and kick you out. You do not deserve to be serving We the people.

The board of Flag Australia Incorporated and our Subscribers believe LPSA

should be lobbying the government, the opposition, the greens and the

Western Mt Lofty Ranges, we have paid for our water that falls freely from

the sky when we purchased  our properties. 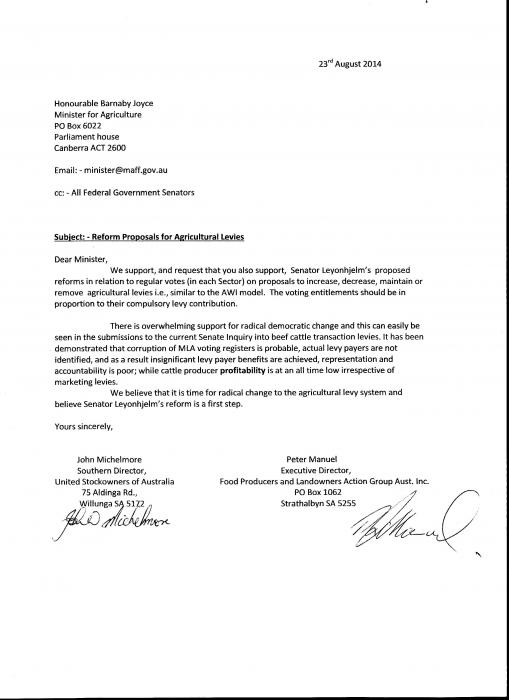 To the leader of the opposition the Hon. Steven Marshall,

I read recently where the Labor government are making budget cuts to the natural resource management community grants program. Finally looks like a Labor government are waking up that this so called environmental department are costing this state and are not producing a thing.

Michelle Lensink allegedly states the Weatherill governments disastrous cuts will leave our farms and national parks vulnerable to invasive weeds, and feral animal infestation. I am really missing something here Ms Lensink re us food producers have to buy our rabbit bait, fox and mice poison and also chemicals to spray our weeds.

Until there is a bounty put on foxes like there use to be, and food producers get real help in the way of subsidies for the mice, rabbit and fox bait and chemicals to spray our noxious weeds to actually help us to grow food for this state, nation and export market and nip this natural resource management in the bud, we the food producers will be a thing of the past.

A true Liberal wouldn't have a bar of these draconian laws that us food producers are putting up with. Until the Liberal party make big change, I like many others could not vote for a party that obviously has been infiltrated by a green agenda. To think low flow bypasses and meters on dams could've been stopped last year but the Liberals supported them.